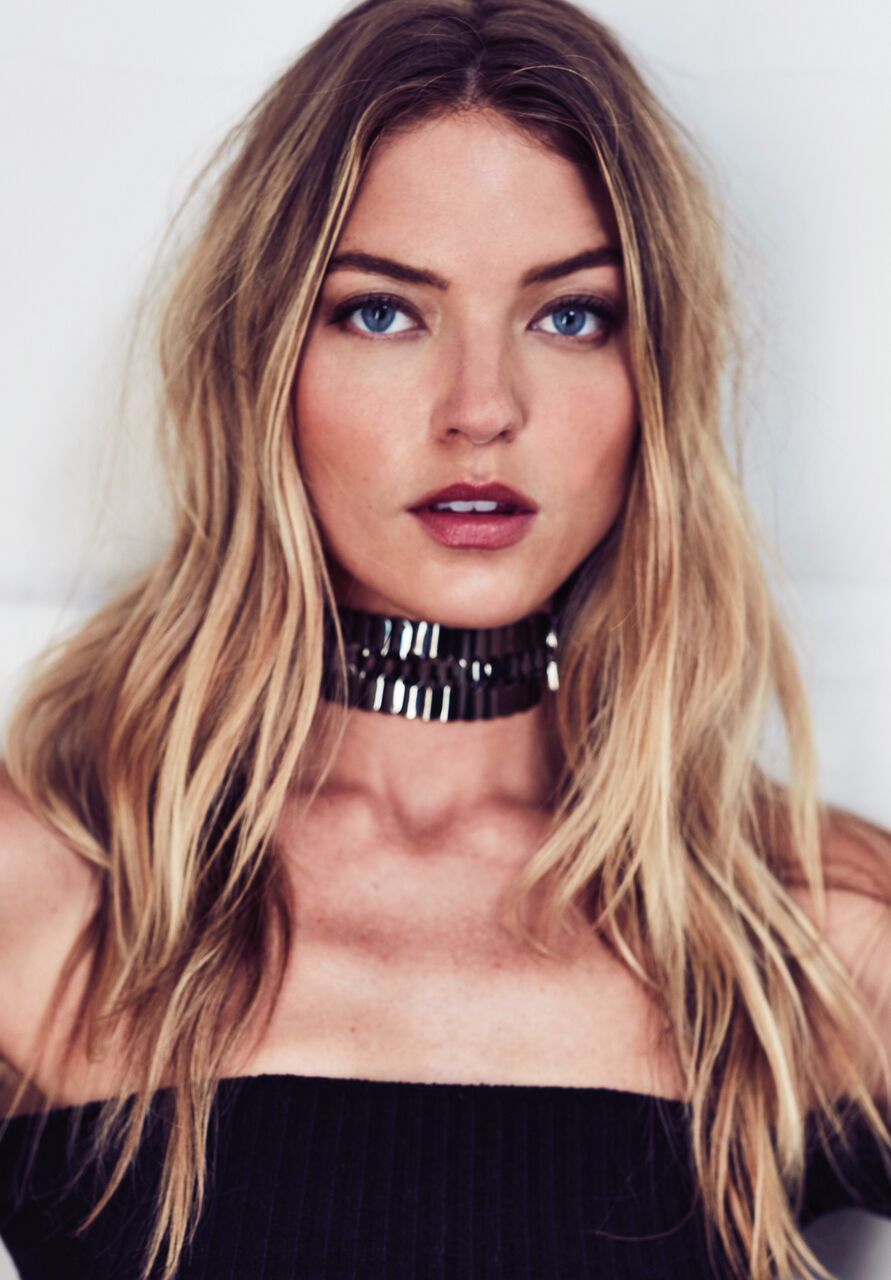 Supermodel and Scoliosis advocate Martha Hunt teams up with Pluma Italia to create the capsule collection “Inégal” benefiting The Scoliosis Research Society. The collection, comprised of two special edition designs available in rhodium and 24 karat gold, is handcrafted in Italy and made of plated brass plates with leather straps.  Interlocked, the plates emulate vertebrae creating a metallic spine choker.

The designs themselves are named “Caroline” after Martha’s mother who gave Martha the love and support she needed to battle the disorder.  “Caroline 1” has scales or vertebrae that are 2 inches in length while the “Caroline 2” has 1 ½ inch vertebrae.

“We created pieces that would honor the beauty of the spine, its simplicity, and genius.  The design also calls to mind how integral the spine is to human life and the burden that Scoliosis causes to the people who suffer from it with elegant simplicity, which is also reflected in the name “Inégal” meaning unequal or uneven.” - Pluma Italia Creative Director Brendan Cannon​

“Brendan Cannon is a friend of mine and has a pure heart.  Together we discussed the idea of designing beautiful jewelry, inspired by the experience of having Scoliosis, and we came up with two stunning chokers, the Inégal Collection.  As 100% of the proceeds will benefit The Scoliosis Research Society, I want women who wear the "Inégal" collection to feel beautiful and empowered.”- Martha Hunt

​The collection is available at Luisa Via Roma - www.luisaviaroma.com

Sara Sampaio Elsa Hosk and Candice Swanepoel posts pics of themselves wearing Pluma Italia's Inegal line designed by Martha Hunt and Pluma Italia's Brendan Cannon - with each of their followings in the millions, they've helped their friend's efforts reach​ around 26 million more​ people around the world​.​ 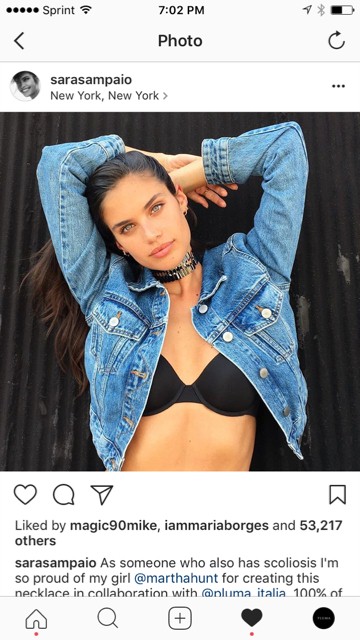 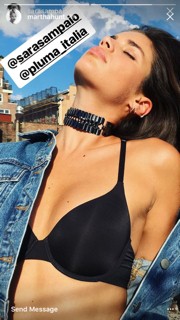 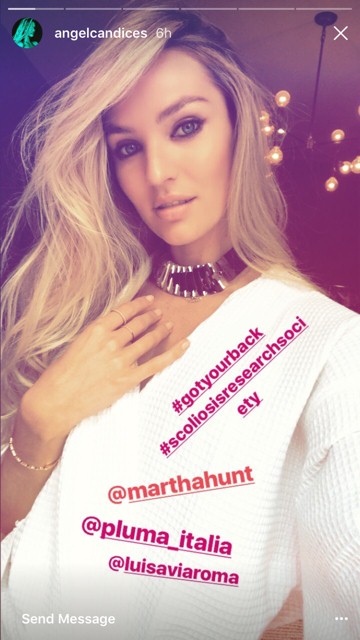 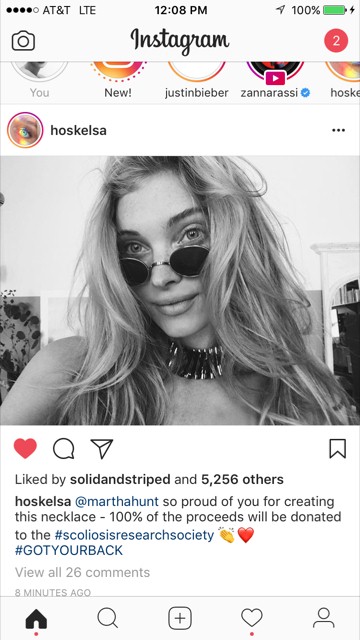 Raised in North Carolina, Martha moved to New City to pursue a full-time modeling career in 2007. She has worked with many high-end brands and designers, and has been featured in top-tier magazines such as Vogue, Harper's Bazaar and Glamour.  Martha has the distinction of being a Victoria's Secret Angel since 2015.

Martha dealt with Scoliosis from the ages of 14-18 and finally had a spinal fusion at age 18.  It is a physical and emotional burden during adolescent years Martha felt lonely and insecure throughout the process and being able to relate to the thousands of people that undergo treatment for the condition, she’s passionate about spreading awareness. The need to bring awareness combined with how much research has evolved and needs to improve sparked her interest in becoming an advocate.

She visited Capitol Hill during the last two years, on behalf of The Scoliosis Research Society, asking Congress for more funding for all orthopedic research, through the National Institutes for Health (NIH).

Brendan Cannon is the Creative Director of PLUMA, a collection of chic and elegant accessories produced in Italy by some of the premier luxury artisans in the world.

Cannon grew up in New York City and was influenced by his love of music and fashion from an early age. He began his career as stylist and over the course of his career has worked with publications, such as Vogue, Vogue Germany, Vogue Brazil, Vogue Mexico, W Magazine, Vanity Fair, New York Magazine, and Niche Media publications. He has also worked with celebrities including, Diane Kruger, Angelina Jolie, Hugh Jackman,  Emily Blunt, Jennifer Garner, Katie Holmes, Liza Minnelli, Michael Jackson, Bradley Cooper, Matt Damon and Keanu Reeves. In addition, Cannon has been featured as style expert on networks such as E!, Style, VH1, CBS, NBC, ABC, TLC and Bravo.

Drawing inspiration from his travels throughout Tuscany, Cannon’s experiences with the family-owned, specialty factories there inspired him to create a collection of accessories; suites of styles are grouped according to the materials used and produced in conjunction with a factory that specializes in the relevant technique.

“Before meeting with the manufacturers to start the design process, I explored Italy to visually ‘inhale’ the balance of color and scale, from the natural landscape to the architecture to even local street style. Italy has long been the birthplace of the most luxurious fashion brands and trends, so I wanted to pay homage to that,” he said.

Cannon’s designs reflect the multi-faceted lives and sophistication of women who covet and wear luxury accessories. The precise combinations of luxurious elements like brass with molded resin, high-grade leather, and enamel give an elegant sensuality, allowing the jewelry to become a wardrobe staple.

About The Scoliosis Research Society

The Scoliosis Research Society is a non-profit, professional organization, made up of physicians and allied health personnel. Our primary focus is on providing continuing medical education for health care professionals and on funding/supporting research in spinal deformities. Founded in 1966, SRS has gained recognition as the world's premier spine deformity society. Please visit www.srs.org for further information. 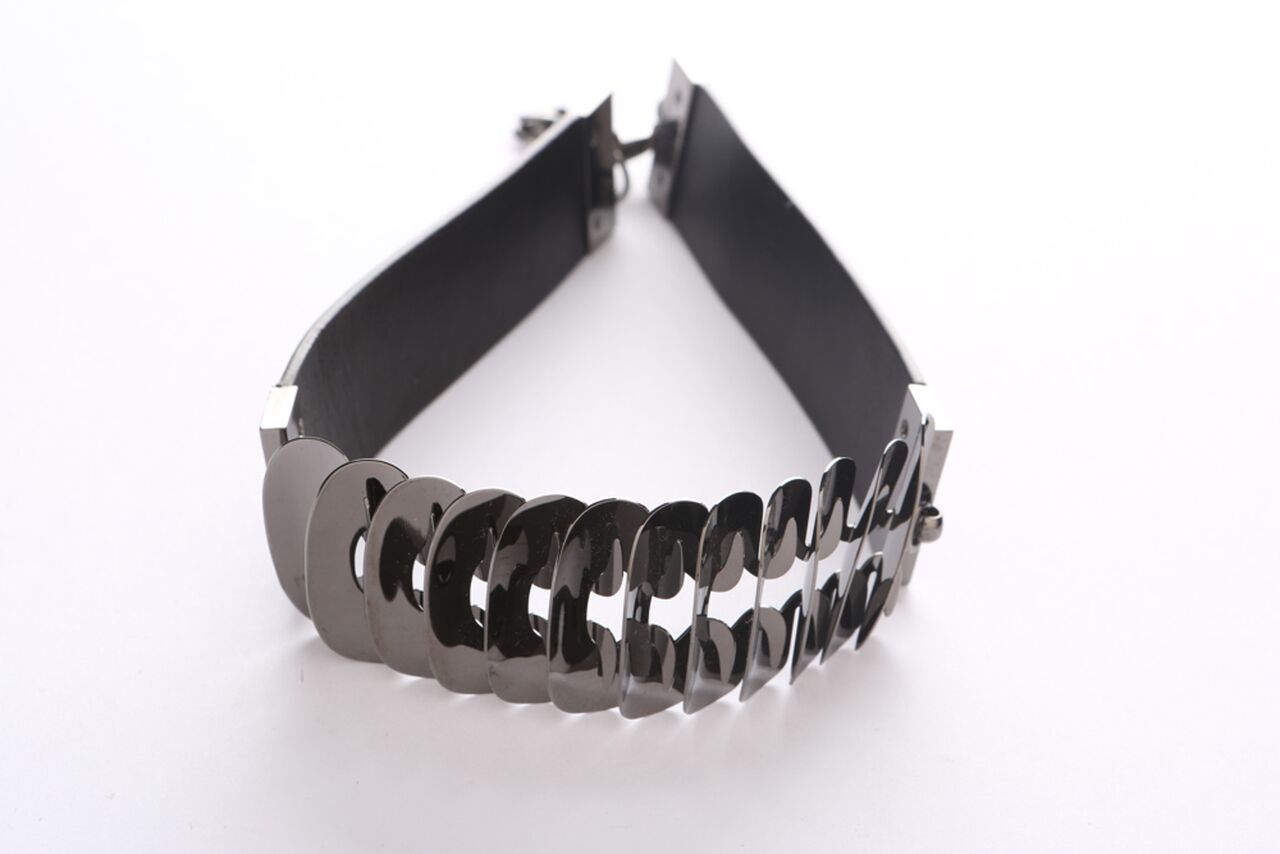 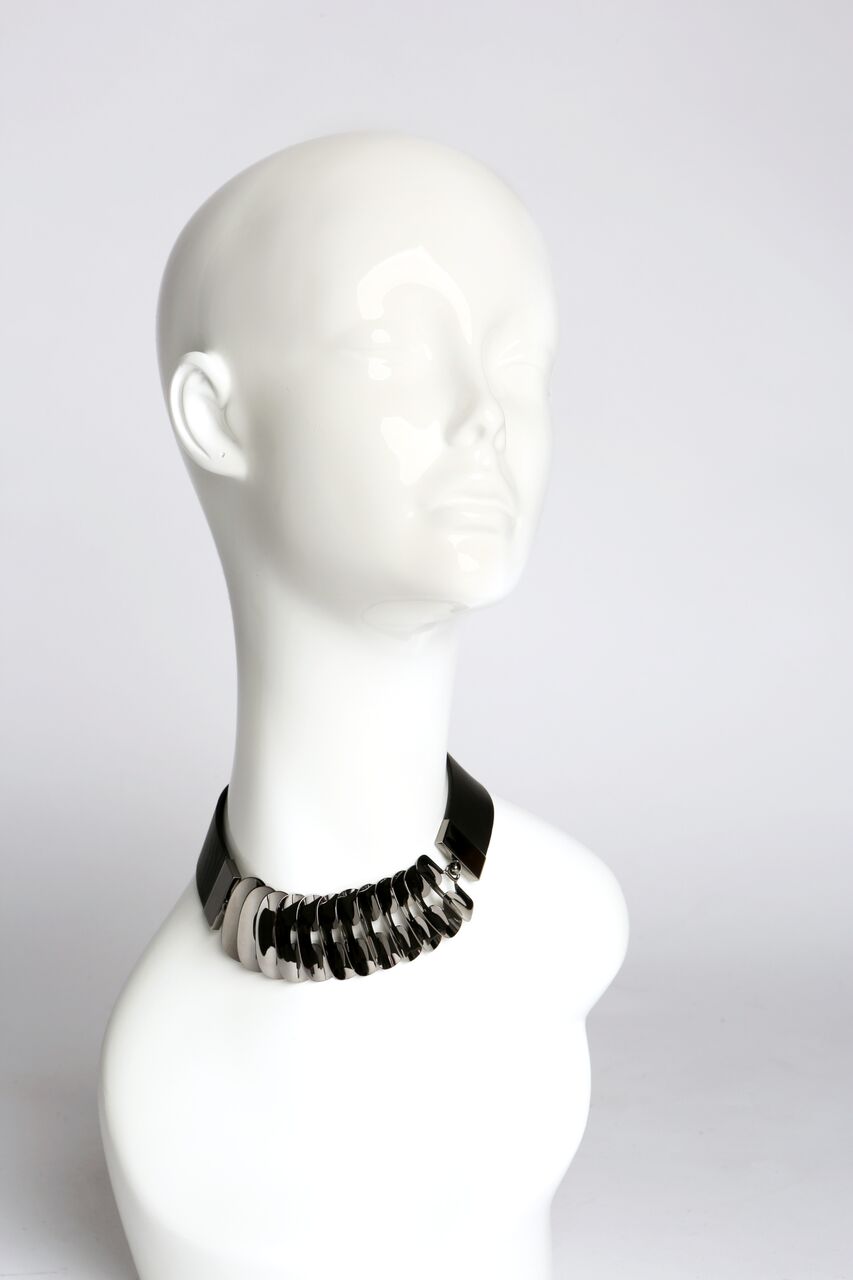 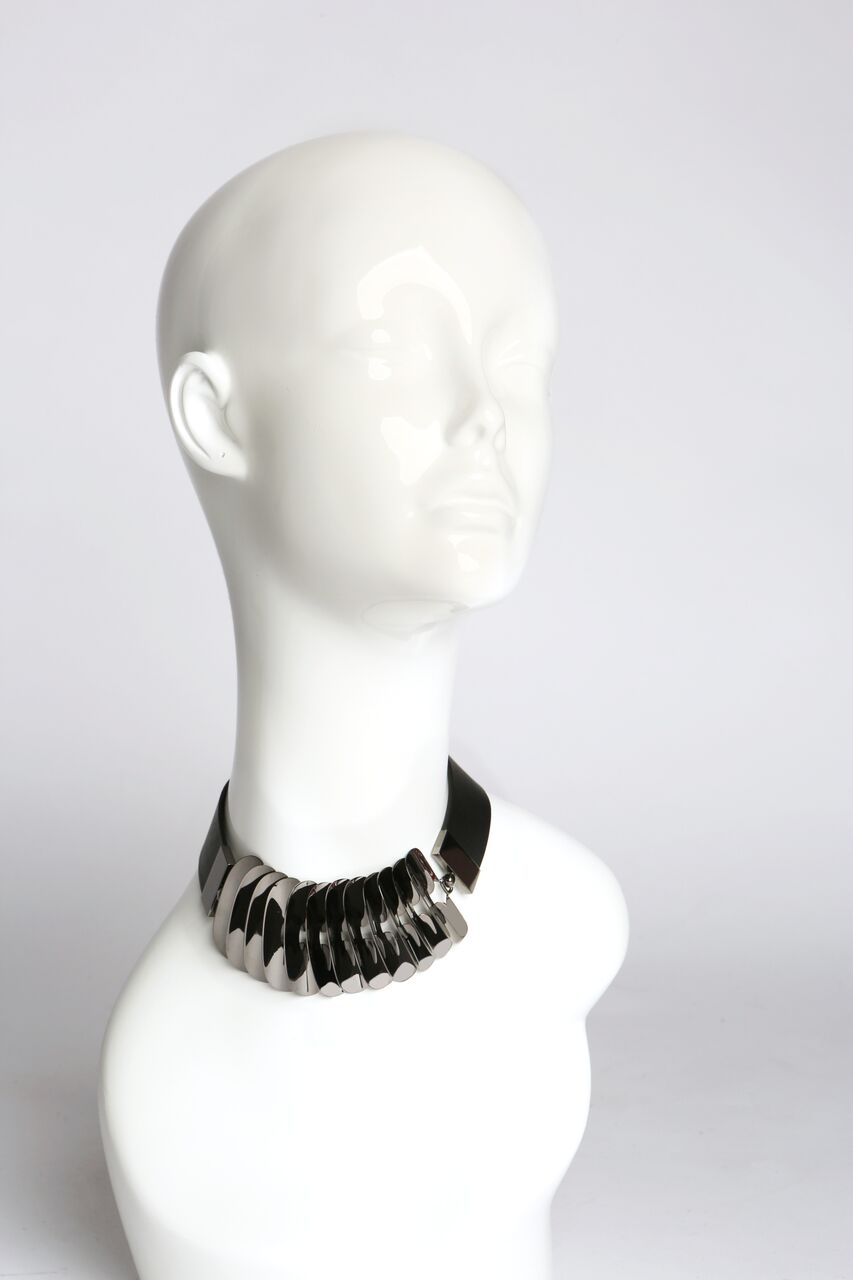 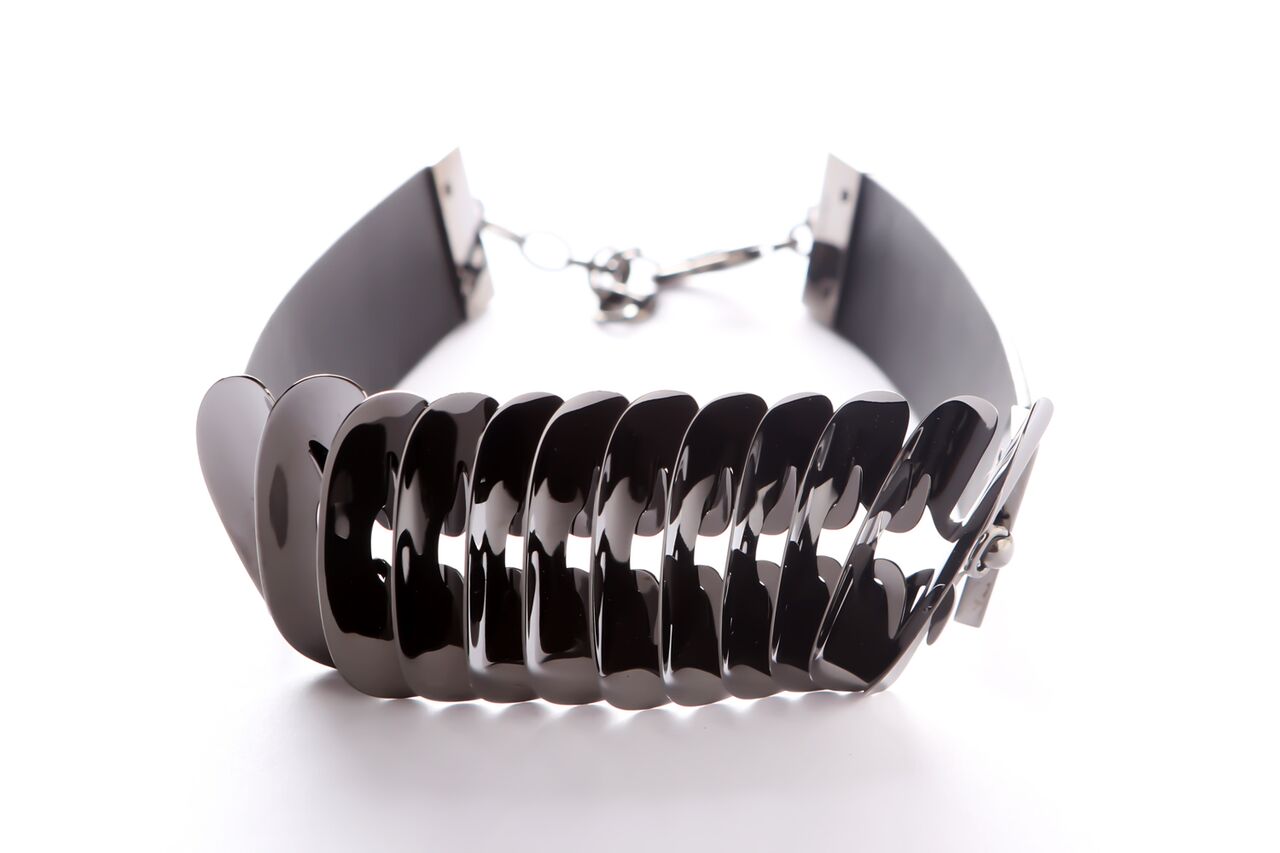