Scoliosis Research Society (SRS) teamed up with the American Academy of Orthopedic Surgery (AAOS) for 2016 Research Capitol Hill Days April 14-17, in Washington, D.C., to present actual patients to members of Congress in an effort to highlig 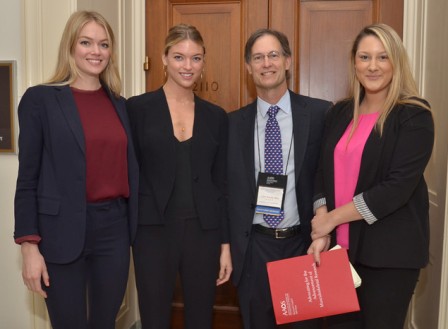 ht the importance of Orthopedic research. This annual event is a special time for Congressmen, Congresswomen, Senators and their staff to visit firsthand with the very constituents they represent. This year’s event was especially timely with the request supported by AAOS and SRS for NIH funding to be increased from 32 billion dollars to 34.5 billion dollars. Much of Orthopedic research funding is channeled through NIH grants.

Each society is asked to bring along a patient with a story to tell. Gary T. Brock, MD, chair of Health Care Policy and Advocacy for SRS, from Houston, TX, had an idea to create a little excitement in DC! In reviewing the patient stories featured on the SRS website this year, two young ladies, who both happened to be Victoria Secret Angels and Supermodels, submitted their stories about dealing with scoliosis as adolescents and beyond. Dr. Brock approached both women about representing SRS, advocating for patients with scoli

osis and both agreed to participate! AAOS lobbyist, Stephanie Hazlett, and SRS staff arranged for the itineraries to work out for these busy world travelers. Martha Hunt is a current Angel who was recently featured in Taylor Swift’s song Bad Blood. She and her professional photographer husband came up with many of the ideas in the video. Lindsay Ellingson is a “retired” Angel who was very proud of carrying the heaviest wings at the Victoria Secret Angel Runway Show each of her eight participating years despite her scoliosis surgery. Lindsay is currently promoting her new line of cosmetics featured in Sephora stores around the country.

It was a busy day in Washington, D.C. with visits to the offices of Representatives Bill Flores, John Culberson, Henry Cuellar, and John Carter from Texas and Carolyn Maloney from New York along with all four senators from Texas and New York, John Cornyn, Ted Cruz, Charles Schumer and Kirsten Gillibrand. A fundraiser for Congresswoman Marsha Blackburn from Tennessee raised over $15,000 that evening featuring “Marsha and the Supermodels”. 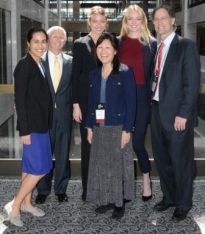 At 6 foot 1 inches, Dr. Brock said it was the first time he ever got into an elevator with three women (Martha, Lindsay and Stephanie) where he was the shortest person in the elevator!  The ladies did a magnificent job telling their stories to each of the offices and many photos were taken. They articulated the difficulties facing young ladies with a potentially debilitating and frightening condition that required life altering surgery. Although they were grateful for the work of their surgeons, both were strong advocates for future research that might allow for earlier and more successful intervention for non-operative treatment of scoliosis patients and improved techniques where surgery remains the most compelling option.

Despite traveling to many of the most beautiful and exotic destinations on Earth, both of our Angels were profoundly touched by the experience. Lindsay commented, “This was a team effort unlike any other I’ve ever been a part of. I was so inspired by the patient advocates, doctors and researchers that I met. Research Capitol Hill Day was the most important event I’ve ever been a part of. It was an honor to share my story with the many Congressmen, Congresswomen, Senators and their staff. They were 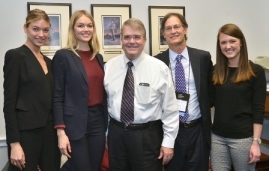 mostly supportive of our asks and genuinely interested in our stories. I really felt like we made a difference. We were a great team!”

Martha added, “I have always found Capitol Hill to be fascinating. Since my everyday world is consumed with fashion and photo shoots, it never dawned on me that I could be a part of the conversations happening in Congress! Now, I can encourage anyone to be proactive by advocating for any issue that they feel passionate about at Capitol Hill. It was such a rewarding feeling to be involved with AAOS and SRS at Research Capitol Hill Day and one that I hope to return to every year that SRS will have me back!”

Advocacy matters. Congress needs input from real life patients, doctors and researchers. Thank you to all of the participants, particularly our patients who took time from their own busy schedules to advocate for the care of others with similar conditions. Angels? Yes, they are.