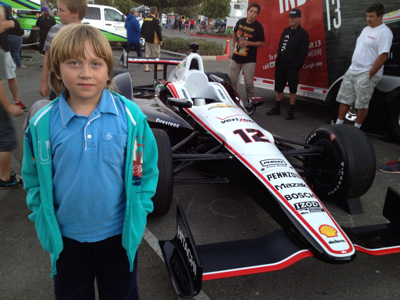 In a revolutionary treatment for Early Onset Scoliosis (EOS), a team of surgeons implanted Magnetically Controlled Growing Rods (MCGR) in two children from California. The pioneering surgeries were performed on May 7 in San Diego. My son, Anthony was one of these patients.

It was 2005 that we received the first devastating news that Anthony suffered from EOS. Regrettably, I was far too familiar with scoliosis. My mother, sister and first cousin all had scoliosis. I am somewhat ashamed to admit it, but I probably trivialized Anthony’s scoliosis in the beginning. After all, my mother had a significant curve, but still managed to have three children and live a normal life. I hoped that Anthony’s curve would not progress to the point that he would require risky and painful spine surgery.

At first, the specialists said Anthony should be carefully monitored and x-rayed every six months to see if his spine curvature was progressing. Anthony’s scoliosis curve was so significant many specialists wanted Anthony to be put in a full upper body plaster cast to slow down the progression. Those casts would then be cut off and replaced approximately every three months. This casting process would continue indefinitely, until surgery someday in the distant future. My wife Lena and I did some research and spoke to many people about casting. Casting would turn an active child, like Anthony, into a lump. He could not bathe, much less swim, with a cast. Some doctors candidly told us that casting is too extreme, has not been proven to stop or correct the curvature and can cause lots of problems, like sores and infections. We debated the subject intensely. I wanted to give it a try, but Lena was totally resistant to the concept.

Ultimately, Anthony was never put into a plaster cast. Instead, he wore custom made orthotic plastic braces until his surgery in 2013. 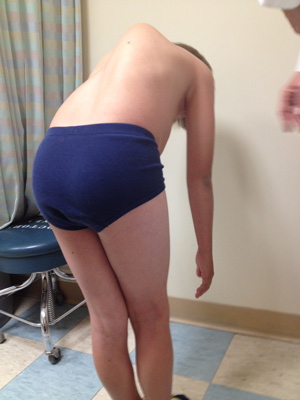 By the time Anthony was 3 years old, I could no longer downplay the situation. Like many parents, I spent lots of time and money searching for the finest doctors and medical treatments for Anthony's scoliosis. I devoted countless hours learning about different treatments and surgical procedures. It was daunting and depressing. It seemed that every path lead us in the direction to where Anthony would face multiple painful, risky surgeries through most of his youth and teenage years.

In 2010, I learned about a system of magnetically controlled spinal growth rods. The fact that Anthony would not be subjected to anesthesia and the pain and risk of surgery every six months to lengthen the growth rods helped lessen Lena’s basic objection to growth rod surgery. I continued researching this surgery and found that the MGCR procedure was not available in the US even on a clinical trial basis. Growing desperate, I began to explore the possibility of liquidating everything we owned and moving our entire family overseas so Anthony could undergo the procedure.

In 2012, we were referred to a physician who was already working on MGCR surgery and was very impressed with his knowledge and experience. Unfortunately, there was nothing he could do to help us obtain this kind of surgery for Anthony, as it was not approved by the Food and Drug Administration (FDA). We were extremely disappointed and I soon found myself researching options all over again.

In mid-2012, I found a highly respected orthopedic surgeon who agreed to perform the MCGR surgery on Anthony in Europe. We decided that time had run out and regardless of cost or problems, we needed to get Anthony the surgery even if we had to liquidate every asset we owned and move to Europe. However, a problem arose with the proposed hospital in Europe. Again, we had reached a dead end.

In March 2013, we were told that waiting was no longer an option and that there were no other options but to schedule traditional growth rod surgery. Anthony's curve now exceeded 100 degrees. We were devastated. Hours after that doctor’s visit, I received a call from physician who was already working on MGCR surgery informing me that he and his team were making a special application to the FDA for a "Compassionate Use" exemption in order to implant the MCGR rods in Anthony. For the first time in years – we had hope that Anthony would be spared the pain and associated risks of undergoing major surgery every six months or so throughout his youth and teen years.

We were overjoyed when the FDA granted a Compassionate Use exemption and the Children’s Hospital approved the procedure. The surgery on May 7 could not have gone more smoothly. The physician and his team implanted the MCGR rods in Anthony. As a result of straightening his spine, Anthony instantly grew two inches and most importantly, his 105 degree curve improved dramatically. The before and after x-rays speak volumes. 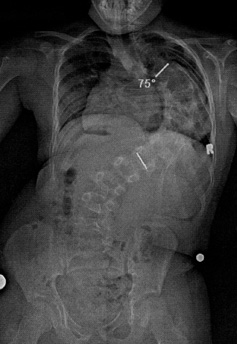 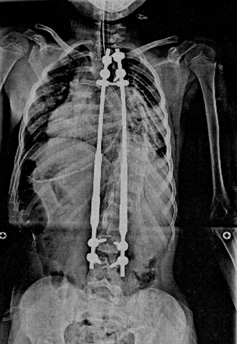 Lena and I were thrilled to learn the surgery was a success and showed us the amazing x-rays. However, seeing Anthony in recovery was still very, very difficult and emotional. I felt so many emotions: concerns about his pain, excitement that everything went well, worries about his recovery process and tremendous relief that the surgery is over.

On the morning after surgery, Anthony surprised us all when he told the nurse in a very serious tone that he wanted to stand up. He was on a lot of pain medication and we thought he was hallucinating. But, later that day he surprised us by standing up for a few minutes, but with a fair amount of pain.

We were ready to leave the hospital on May 15. Anthony’s brace was ready and he was instructed to wear it for at least three months after surgery, except when he was sleeping. We were also informed that he could not bend, lift or twist for three months. Also, no contact sports for at least a year.

On June 3, less than 30 days after his surgery, Anthony underwent his first lengthening. It took only 15 minutes. He felt no pain, but did feel a little movement/tingle during the procedure.

Incredibly, Anthony returned to school full time the very next day! Anthony’s third grade class, his teacher and his principal, were all very excited that he was able to return to school so quickly. The students had prepared lots of get well cards and posters to welcome him back. Our Anthony had officially returned to his usual active kid status. He wanted to play again. The big problem was keeping that energy under control.

His second lengthening occurred on August 19. This time the rods were extended slightly longer than the first time. He was asked to take it easy for a week or so. Unfortunately, Anthony could not resist playing in the hotel pool. He played a little too hard and he was a little sore after, but that went away with a few days of rest.

The third lengthening took place on October 21, 2013. It was totally uneventful as far as the lengthening. Anthony felt a little "push" as he called it, but no pain or discomfort. Because there are two x-rays taken before and after each lengthening and despite those being done with EOS technology, which takes both views with one exposure instead of two and has eight times less exposure than regular scoliosis x-rays, Anthony would be exposed to more x-rays at a very young age than most. At this lengthening, his doctors decided to make an adjustment after he had already had four x-rays. Rather than expose him to more x-rays, they brought in an ultrasound machine to attempt to get an exact measurement of the extension. After some time spent probing and measuring, the ultrasound technician successfully calculated the precise amount of rod extraction. The team of doctors were extremely pleased with the outcome of this first trial and plan to continue to use ultrasound in lengthening procedures in the future. I see it as just one more example of how they use every opportunity to improve the outcome and procedures used in Anthony’s spinal correction.

Anthony was lucky in the sense that he has greatly benefited from implantation of the MCGR rods. So many children endure risky, painful surgeries every six months because their doctors are forced to use outdated standard growing rods. I trust and pray that the FDA will ultimately approve the MCGR rod system for all children with EOS.

Our prayers have been answered. In early March, 2014, the FDA approved the MAGEC system for children less than 10 years old. We are so pleased that other children will finally have the option of getting MAGEC rods instead of traditional growing rods. Frankly, we cannot imagine why anyone would even consider traditional growing rods, assuming they are a candidate for MAGEC rods.

We fully recognize that any new medical procedure is a scary process for parents and children, so it is important that all medical options are discussed with your physician before undergoing any treatment or surgery. We believe it may be helpful to have someone to talk with who actually had the surgery and we plan to make Anthony and ourselves available to parents and future/potential MAGEC system patients to answer their questions and concerns.

We are so excited to share our experiences and give hope to parents and children throughout the United States who, like us, were desperately searching for alternate treatments to traditional growing rods. We feel so blessed and happy to spread this wonderful news about the FDA's approval. Please feel free to send questions to info@srs.org.