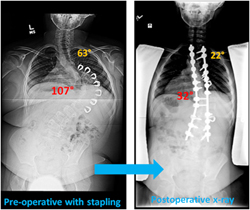 Brennen was 12 years old when he presented for care. He has Prader-Willi syndrome which is associated with the development of scoliosis. Brennen was diagnosed with scoliosis at an early age. His curvature worsened over time and he was treated by another surgeon with Vertebral Body Stapling, a fusionless technique which failed to halt progression of his curve. He then was treated with the VEPTR procedure but his curve continued to worsen, progressing to 107 degrees.

Brennen had additional surgery performed by his new surgeon in August of 2013, in which some of the staples were removed, and his vertebral column was reconstructed and spinal instrumentation performed. The surgery went very smoothly as did his post-operative course. Brennen has been doing very well. His curve was corrected to 32 degrees and he gained three inches in height. At his four month post-operative visit, Brennen was told he can begin to resume full activities.

Brennen stated, "I feel so much better. It is much easier for me to move and walk."

Brennen at his post-operative visit

Brennen’s mother was relieved by his successful outcome. "We tried stapling and growing rod procedures, which basically failed. We also did exercises including horseback riding and chiropractic to strengthen Brennen’s muscles to prevent curve progression, but nothing worked. We didn’t really know what to do, until we had this last surgery. Brennen is 3 inches taller after surgery, which is the selling point for him. His quality of life is so much better. We are so grateful. It is like a miracle happened for us."