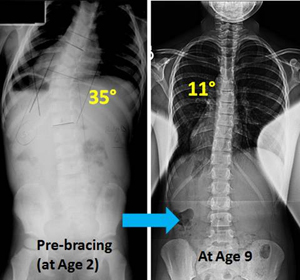 Brielle is now 15 years old. She was diagnosed with infantile idiopathic scoliosis and had a left thoracic curvature of 35 degrees at 18 months of age. Brielle started to wear a brace when she was two years old. Her thoracic curve was reduced from 35 to 12 degrees after just two years of a full time bracing program. Her curve has been stable since then and was maintained during her pubertal grow spurt. Her brace wearing time was gradually decreased from 20 to 12 hours a day.

Brielle is very active and plays competitive basketball. During her most recent visit, her curve was stable at 9 degrees with her being out of the brace for three days prior to the visit. Brielle is currently weaning out of the brace.  She has been a stellar patient who was committed to her bracing regimen over many years along with the love and support of her family.

Brielle’s case is a dramatic example of the benefits of bracing as recently emphasized by the publication in the New England Journal of Medicine of the prospective, randomized, multicenter, NIH-funded BRAIST study in adolescents undergoing bracing. http://www.nejm.org/doi/full/10.1056/NEJMoa1307337?query=featured_home& 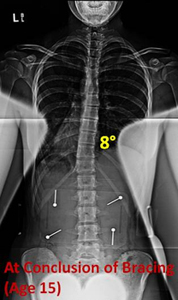 Brielle was diagnosed with infantile scoliosis at eighteen months old.  We were on vacation and I noticed that one of her bathing suit straps never stayed on her shoulder.  I noticed that her shoulders were uneven.  Brielle was sent for an M.R.I. and from the x-ray we gleamed that she had a 35 degree curvature of the spine.  We were sent in search of a scoliosis doctor and chose a practice that specialized solely in scoliosis.

Brielle, to this day, is the youngest patient that our doctor has aggressively braced.  Aggressive bracing entailed Brielle wearing a brace for 20 hours a day!  She had numerous doctor visits to determine where the pads on her brace should be placed, and she also had many braces, getting larger as she grew.

When Brielle was very small she would decorate her brace with stickers.  After appointments at which her brace was adjusted, she would get in the car, buckle into her car seat and cry.  It broke my heart, but although her doctor always told her she could take off the brace if it hurt her, Brielle was always a trooper and was smiling by the time we arrived home. 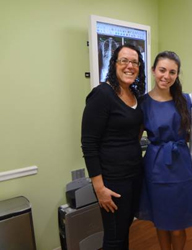 Brielle was never ridiculed for wearing a brace.  Only one time in kindergarten one of the little girls would constantly touch her belly and comment on her brace.  I called a very understanding mother who stopped that behavior right away.  Dressing Brielle to cover the brace was difficult, but together we learned how to accomplish this.  I must admit it became more difficult as she got older and styles became tank tops and off the shoulder tees.

Wearing a brace and having scoliosis never stopped Brielle from enjoying any physical activity.  She played and excelled at soccer and basketball.  She especially enjoyed swimming as it was considered not out of brace time although she was out of brace!

Brielle has always excelled academically and was salutatorian of her class.  Brielle has never let scoliosis limit her.  Maybe because she was so young, it was our normal.  She also realizes it is not catastrophic to have something that can be fixed.  There have been numerous times when we are at her doctor’s office and a teen will get the bracing diagnosis and they just break down.  This angers Brielle and I, as for us it was a long process, for most it is just a few short years.

Brielle has matured into a 5 foot 9 inch wonderful teenager.  There are really no words to convey how proud I have been of her on this journey.  We are at the home stretch and eagerly awaiting the words, “You are done!!” 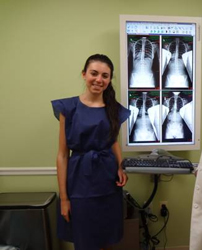 Although I do not remember when I was diagnosed with scoliosis or the first time I ever went to see my scoliosis doctor, I am told I cried, a lot. I do remember struggling to sit in class with my brace on when I was younger or getting extremely warm after playing gym and not being able to cool off. This is when my parents would explain to me to be grateful that my back can be fixed, and that this cannot last forever.

Now, I am 15 years old and I only wear my brace to sleep. The biggest and most exciting news I have gotten since I have been going to the brace doctor was that I wouldn’t have to wear it to high school and that I am near the end of the road. Now that I am 5’9 and almost done growing, I get a nervous and exciting feel every time I go to the brace doctor hoping that this would be the day I get rid of my brace forever.

My biggest struggle I have had to deal with was dealing with my brace at sleep away camp. I have been going to camp ever since I was only eight years old and I have brought my brace every single year. The main struggle was the heat. I would get antsy at night as the heat became unbearable. To fix this, my mom sent me up fans to sleep with throughout the night. Another issue was explaining my brace to my friends my first summer at camp. My counselors would help me put it on every night and my camp friends would ask me a lot of questions. Although it made me uncomfortable, I realized they never meant to interrogate me, they were just curious. I have been going to camp with the same girls for the past 7 years and now, they always fight over who gets to help me put on my brace at night. They find it fascinating.

My advice to anyone who is recently diagnosed with scoliosis is to be glad that it is a problem that can be fixed. It is not permanent. There are too many illnesses in the world that cannot be fixed. If we put scoliosis in comparison to something like that, it is like a small cut on the arm. Everyone must put their life in perspective and be grateful for what they have.

I am so glad to be near the end of this journey. I have heard of kids who dread going to the doctor. I find it very exciting because I love to see my x-rays and the progress the brace has done for me. Now, I’m just waiting for the final “You’re done!” appointment.