×
Home: Patients and Families: Patient Stories: Caitlin's Story: Some battles can be won…

Caitlin's Story: Some battles can be won…

Caitlin's as Told by Her by her Parents

Some battles can be won… 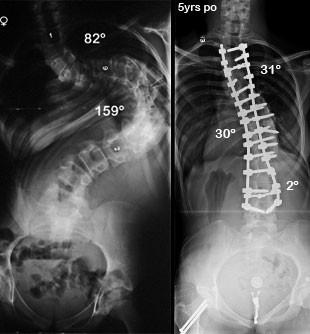 Caitlin has always greeted the world with a smile and an outgoing personality. Despite the fact that she lives with mental disabilities that affect her level of interaction with those around her, she has never let that stop her from trying. When she was diagnosed with scoliosis, however, and endured a rapid progression of the disease that took her to an almost crippled state, the odds of living a happy and productive life got much slimmer. Caitlin's scoliosis presented at a fairly early age and progressed rapidly. Early on, we tried bracing and exercises and the such. Nothing helped and her condition continued to progress to what she presented at the hospital as a 155-degree curvature.

Caitlin didn't really complain about pain from the scoliosis except when she was strapped into her brace at night. She did however talk about her "humpy" back. The scoliosis was definitely having an effect on her self image and confidence.

What I remember most were the discussions we had with our local doctors and specialists. They all said basically the same thing; that Caitlin would definitely need surgery to treat her scoliosis when she got old enough. The frightening part was they also said a curvature like Caitlin's could not be straightened and that surgery would be used to fuse it into place so it would not get worse. Our doctors are all wonderful men, that was just the conventional wisdom and standard protocol at the time for scoliosis.

When Caitlin was first evaluated by her surgeon, she was bent over sideways and her little shoulder was practically touching her hip. The idea of her being permanently deformed like that was devastating and the prospect of having to make that type of decision was oppressive. Her surgeon was the only doctor who offered the hope of normalcy for Caitlin. The miracle of Caitlin's treatment is not only the wonderful outcome, but the stark contrast to what it might have been.

After going through the intensive four month procedure to permanently straighten her spine, she finally had one less obstacle standing in her way. She was no longer disfigured…she became a beautiful, happy teenager with a very straight (and pain free) back!

Caitlin told me that after the surgery, she couldn't believe that she grew so fast! She remembers every detail from her stay…from the halo and weights that stretched her out…to the scars she still regards with pride when she sees them in the mirror because it is a reminder of what she went through. She said her doctor made her feel a lot better. I know that without him, her teenage years would have been much different. He literally saved her.

Caitlin went on to high school and became a representative of what teenagers with disabilities can achieve. She was the first special education student to be invited to join the cheer squad where she participated for four years and made lots of friends. She would not have been able to be a part of this group if she had remained crippled by the scoliosis. Her spirit touched all of the cheer squad over the years and helped them to know the joy of acceptance.

Her doctor took one summer to fix one young girl's misshapen spine. And she, in turn, touched many. Caitlin just graduated from high school this past May, and looks forward to what the future may hold. One of her dreams is to be an actress or model. Now that she has a beautiful straight back, and a heart-melting smile to go with it, we know that all of her dreams are possible.