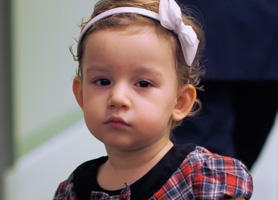 Little Ceren's story begins even before she was born; she was diagnosed with a spinal condition at 23 weeks gestation. Ceren was born on the February 23, and had scoliosis surgery at 23 months. Now, she laughs, plays and runs around without a care for the plaster cast was is in.

Her parents, who live in Gaziantep, Turkey and have a son, were ecstatic when they learned that they were expecting a second child. Going through a seemingly normal pregnancy, mother wanted a detailed ultrasonogram done. The ultrasonogram taken during the 23rd week of pregnancy showed that the baby had a spinal condition. Based on the results of the ultrasound, the radiologist said that the child would be born with a forward and sideways curvature. The expecting mother was, of course, shocked to learn from her doctor that her child could be born with scoliosis due to underdeveloped vertebrae (hemivertebra), paralysed or even mentally handicapped. Once she was over the initial shock she told her husband, of the overwhelming news. Ceren's parents wanted to give their child the best possible chance at life and decided to move forward and find the best solution to their child's unknown spinal condition. While searching the internet they consulted with countless doctors in both Istanbul and Ankara and were confronted with many views and opinions as to what needed to be done. The family continued to search and soon came upon a physician who immediately responded to the mother's heartfelt and sincere letter "...rest assured that we will do everything after you have your child."

Ceren's mother firmly believes that expecting mothers should definitely have a detailed ultrasonogram done. "Since the baby's movements make it difficult to notice critical issues, they should look carefully especially at the spine," mother explains, “The radiologists eye, in our case, was critical to identifying Ceren's condition".

Ceren's doctor first saw the baby girl three months after she was born followed by routine periodic visits every three months after that. It was then decided that little Ceren would undergo surgery when she would be 23 months old.

Surgery lasted for three and a half hours; immediately after which Ceren was put into a plaster cast. Since little Ceren was unaware of the changes and her new cast, she had some difficulties in the beginning. The plaster cast stretched from her underarm to the knee on one leg. Ceren was not able to fully sit, bathe but was washed with a warm towellet, and at first couldn't walk but she adapted very fast. Her farther encouraged her to "Think of the plaster cast as being a loose fitting T-shirt". Ceren didn't have much issue with going to the bathroom either, as she was still wearing diapers at the time. Ceren starting running around the house only several weeks after the surgery despite the cast covering her body and one upper leg. The plaster cast was removed after 5 months and Ceren is now completely corrected of her scoliosis and will no longer suffer any potential side effects of her original diagnosis.

Ceren's mother recalls, "I always wonder what condition my baby would be born in while I was carrying my baby; she didn't appear to have anything wrong with her. We've been very grateful through out this process as we know there are worse cases, but it is a condition which can be treated so other families should certainly not be discouraged or worried."