Hannah's Story as Told by Her Parents… 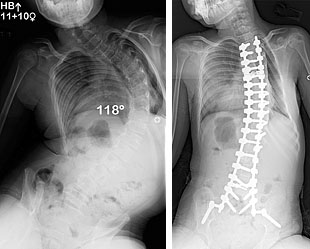 Our daughter Hannah is 13 years old and has turned into a beautiful teenager in part due to the amazing transformation that occurred in March of 2009. Hannah had scoliosis surgery to correct a 118 degree curve. This is a brief history of our story.

Hannah was born with brain malformations of unknown origin. We have had all the genetics tests and no cause was found. The brain malformations have resulted in her being multi-impaired and totally dependent for her care. She began using a wheelchair at 2½ years of age and we have been adding equipment every year it seems. Her diagnosis for most purposes is cerebral palsy. She has low tone in her trunk and higher tone out to he arms and legs. Hannah is also considered deaf and blind. So, she does not talk to us nor does she respond in ways that most kids would if hurt, frustrated, etc. Hannah does not have a lot of skills. One that she did develop was learning how to sit independently. We have worked with the therapists since she was 3 months old trying to keep her body from getting too tight and her trunk from curving. When the therapists saw she was beginning to curve to the left we tried bands, braces, soft and hard, nighttime body casts, etc. She had learned to sit by herself and we were so happy for her. As she grew and her curve became worse, it was more difficult for her to sit up. She had also learned how to drink out of a Sippy cup by herself and with her curve; she was beginning to lose use of her left arm as well. 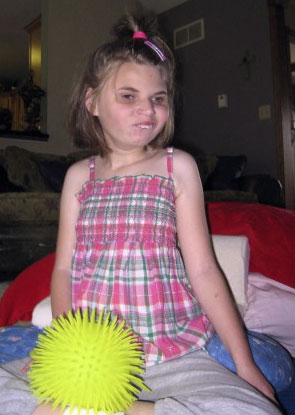 Her curve also posed other challenges, clothes were not fitting, it was harder to get her dressed and undressed, bathing and even combing her hair was difficult. It was getting harder to move her about. AT the end, she was almost like a boomerang; imagine trying to move a 65 pound boomerang around. Mostly we feared how uncomfortable she might be feeling. She couldn’t use what vision she had to see things, as her head was tilted to the side as well. She couldn’t reach for things and her little signs of independence didn’t seem to fit her either. She was leaning over and hitting things on the side when she went by them. She was getting pneumonia worse each time she got sick and her lung functioning was affected as well. We had known that surgery might have to be an option but we were afraid and did not really think it would ever come to that. In 2007, her curve was 35 degrees; I kept track of it knowing that at some magic number we would have to consider surgery. In 11-2007, it was 40 degrees. By 10-08, it was 98 degrees, and by 11-08, it was 118 degrees! Hannah’s ability to sit alone was gone by now, and it was back to propping her up with pillows against things and then it looked painful.

The scariest part of the surgery for me as her mom was the pain she might experience. She rarely cries real tears and she really has no way to tell me how much pain she is in. Of course, we were also afraid of such a lengthy procedure. Her surgeon and his team were wonderful with us and performed an incredible surgery to straighten her scoliosis. She has two rods and 36 screws in her little back. She came out of the surgery and off the oxygen the same day. We were so relieved!

After the surgery, she truly looked like my beautiful little girl! I could see her face because she could hold her head up again. Her clothes fit so well, and she can use her left arm again. It took about 6 months but she can sit on her own again and drink out of her cup. Everyone that knows her says she seems happier! 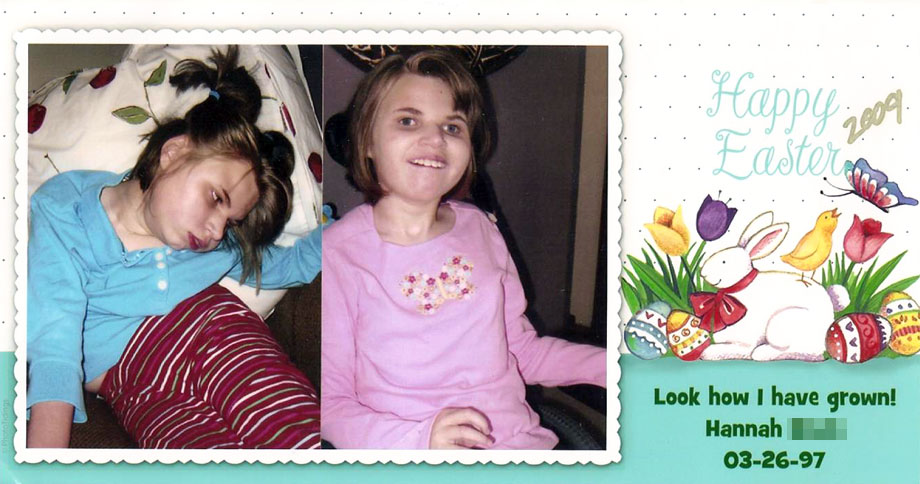