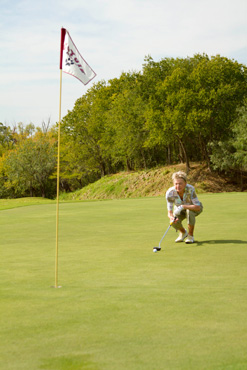 ADDISON, Texas – When you hear the word scoliosis, you probably think of a disease that affects children. Kathy Farrer thought the same thing when she went to see her orthopedist in February 2003. Farrer had been to the heights of women’s golf, playing on the LPGA Tour from 1968 to 1979. After spending 14 years in the business world, she came back to golf as an LPGA Teaching and Club Professional (T&CP) member. Despite an accomplished career, Farrer had suffered from back pain ever since her days on the LPGA Tour, but a new pain finally convinced her that it was time to see an orthopedist. "I had degenerated discs in my lower back for years," said Farrer. "I just always worked around it. I would go see the doctor, get some muscle relaxers and be on my way. But in 2003, I had a new pain in my right side, above my hip, and I just couldn’t shake it." After doing a spinal exam and x-ray, Farrer's doctor came back with the conclusion that she was suffering from scoliosis. At the time, she couldn’t stick a finger between her rib cage and hip bone on her right side.

"The doctor showed me the spine x-ray and it looked like an upside down question mark," Farrer said. "My ribs were resting on my hip bone." The curve in her lower back was a whopping 56 degrees! "At the time, I was thinking that I was never going to be able to play golf again," said Farrer. "But I was recommended to a nearby orthopedic surgeon who was on the leading edge of surgical techniques and research into scoliosis." He immediately began working with her.

Nevertheless Farrer wasn't going to let scoliosis interfere with her teaching duties or playing the game she loves. Despite the pain, she continued to teach throughout 2003, although she was barely able to function. Her quality of life was slowly decreasing with each day. After playing in the LPGA T&CP National Championship at LPGA International in August, she decided to take action and would go through a surgical procedure to correct her back. "Before the surgery, the doctor and his first assistant sat me down and explained it all to me. It sounded very complicated and dangerous. But if it could improve my quality of life, I had to try it." So, on October 27, 2003, she went under the knife. "It is a huge, huge surgery," said Farrer. "They opened me up like a baked potato, both front and back." The procedure began with an incision in her abdomen, from the navel to the pubic bone. Part of the work done here was to replace the four degenerated discs in her lower back. 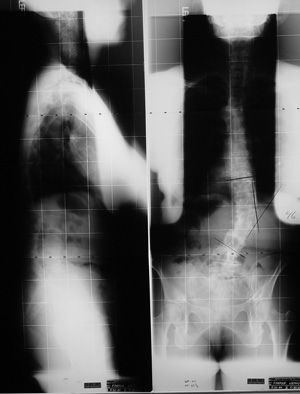 Once that was finished, they turned her over. An incision was made along Farrer's spine, from between her shoulder blades to her tail bone. Steel rods were placed on both sides of her spine and attached to the vertebrae. Through another incision, beside her spine, the doctor chiseled pieces from her right hip to form two of the discs. The other two came from donors. "I don't think there was an organ inside of me that they didn’t touch!" said Farrer. The surgery was a success and with the "easy" part done, the hard part began - getting back to a normal way of life. "When I first came home, I couldn’t lift a half-gallon of milk," said Farrer. "For three months I could do very little. My back brace was like a turtle shell, which I had to wear for five months. Healing my body became my full-time job." She began her rehabilitation program as soon as possible and by Christmas, she was able to walk for five minutes. "I started my physical therapy in my brace, which made it tough to do things," said Farrer. "But I was persistent in my exercise program and continued to work at it every day. I was back teaching in January, wearing the body brace and baggy clothes over it."

With her rehab going well, Farrer wanted to get back on the golf course as soon as possible and she didn’t care what her form looked like! "I slowly got back into golf," said Farrer. "My doctor gave me clearance to start chipping and putting; so I would do a little every day. I already had a good short game, but now it was becoming really good! Then I got clearance to do short pitch shots out of the brace, but I was very limited in turning and bending." Still, golf was her saving grace.

She was having "battles" to deal with every day. "With the brace on, it made it hard for me to do even little things," said Farrer. "Just putting on my shoes was a struggle every day." As she continued to get better, she rejoined the ladies on their weekly play day at the country club where she was on the teaching staff. With restrictions limiting her play to just the short game, she would drop a few balls at the green with each group and display her exemplary short game. "On ladies day at the club, I would go out on the course and only chip and putt with each group," said Farrer. "They were extremely gracious by helping me get my balls out of the cup, because I still couldn't bend from my waist." 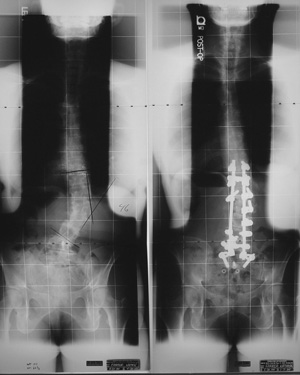 Her rehab continued throughout the summer and by October, less than a year after her surgery, she was able to make a full swing with her driver and was back playing a complete game again. "It took a lot of discipline and dedication to come back from the surgery," said Farrer. "Having golf to come back to kept me going during my lengthy physical therapy. I don't have all of my strength that I had before the surgery, but I can make a full swing and stripe it down the fairway...without pain!"

A native of Decatur, Ala., she was the first woman inducted into the Morgan Country Sports Hall of Fame (in 1991). She, along with her playing partner, was the senior division champion of the LPGA T&CP Team Classic four times (1995-1997, 1999), and was the senior division champion of the LPGA T&CP Central Section twice (2001-02). And in August of 2006, less than three years after her surgery, Farrer was again competing in the Central Section championship, finishing in second place! "Just competing in that tournament, my first since my surgery was a huge "victory"! I’m going to keep playing, teaching, and enjoying golf to the fullest every day!" said Farrer.

Farrer feels that this scoliosis operation is one of the too well hidden "secrets" in medicine. She hopes by sharing her story, through golf, to spread the word about this surgery. "For adults suffering with scoliosis, I want them to know that there is possible help," said Farrer. "You can have a good quality of life after such a drastic surgery, and possibly even play golf again!"

UPDATE: In August, 2017 Kathy shared this, "...more than 13 years after my surgery, I continue to feel wonderful!  And, I have had NO problems with all the hardware around my spine!  I am SO grateful!" We are grateful for your story Kathy, thank you!