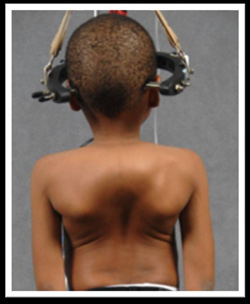 Sechaba’s journey started in Matsieng, Lesotho in Southern Africa and ended half way across the world at Shriners hospital for children in the United States.

Sechaba was born on May 10, 2002. At four months of age, his mother died of HIV, at 18 months of age, his father died of Tuberculosis, but not before giving it to his son. Between ages two and six, Sechaba lived with his aunt and uncle. He was never allowed to sleep in the hut with them at night. He was also physically abused by his family. On three separate occasions the abuse required hospitalizations. At six years old, the chief of his tribe removed him from family custody and sent him to a local missionary. From January to October in 2009, Sechaba lived in an orphanage. This is where Leigh met Sechaba while on a mission trip in October 2009. Leigh just could not get Sechaba out of her mind when she got home in October 2009. Leigh and her husband started the adoption process and were approved in November of 2010, but they were not allowed to leave the country until December of 2010 due to his many medical problems including malnutrition, scabies and tuberculosis. When he arrived from Africa, he weighed only 33 lbs.

Once stateside, a local physician referred Sechaba to a physician at Shriners Hospital for Children (SHC). "We found that one of the best things about SHC is that kids are allowed to be just that, kids," Leigh stated. His spinal curve was first apparent in 2003 at one year old. By May 2009, his curve had increased to 90 degrees. In September 2011, Sechaba was diagnosed with a severe proximal thoracic angular curvature of 150 degrees with severe spinal cord impingement caused by tuberculosis of the spine. However, by the time he was admitted to SHC in February of 2012 his curve had increased to 180 degrees! 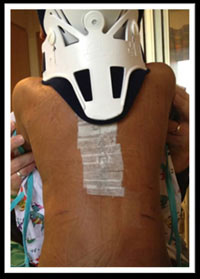 Prior to surgery, Sechaba stayed at SHC for halo traction, pulmonary hygiene and TPN supplementation to build up his protein reserves. His pulmonary function studies showed an increase of 14 percent since starting halo traction and he had gained six pounds since his admission. In just two months while in 20 pounds of halo traction, Sechaba’s spinal curve decreased from 180 degrees, noted on admission, to 150 degrees! This was good news, since the more flexible the spine, the better they usually respond to surgery.

On April 12, 2012, Sechaba went through one of the most complicated spinal surgeries: an ultimate proximal thoracic vertebral column resection (VCR) for correction. Removal of one or more vertebrae without compromising the spinal cord is extremely difficult. The surgery was successful and Sechaba will continue to grow.