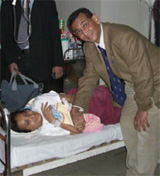 The megacity of Dhaka is the capital and largest city of Bangladesh in South Asia. There are over 150 million Bangladeshis whose official language is Bengali (bangala.) Bangladesh remains a developing nation and currently, only 30% of the population has access to primary health care services with a ratio of 3.43 hospital beds and three physicians per 10,000 individuals. 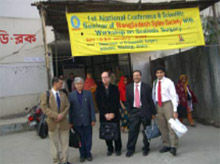 Televised live surgery to members of the Bangladesh Spine Society

The scoliosis surgery and workshop in our missions was held in Bangabandhu Sheikh Mujib Medical University in 2009 and The National Institute of Traumatology, Orthopedics and Rehabilitation in 2011. Both are premier postgraduate medical institutions in the country. The goal of the mission is to encourage local doctors to provide medical care within their limited resources by participating in case discussions and allowing observation of the surgeries with two-way communication.