Often learning your child has adolescent idiopathic scoliosis (AIS) takes a parent by surprise. Because AIS onset is related to age, your child may have passed one or more scoliosis evalua-tions in the past. The good news is that now more than ever, research exploring the cause of and genetic basis for AIS is more robust than ever, and there is a growing clinical interest among physicians who seek to help you successfully manage your child’s disease.

AIS is by far the most common type of scoliosis, affecting children between ages 10 to 18; it’s found in as many as 4 in 100 adolescents. In general, AIS curves progress during the rapid growth period of the patient. While most curves slow their progression significantly at the time of skeletal maturity, some, especially curves greater than 60o, continue to progress during adult-hood. Many theories exist with regard to the cause of AIS including hormonal imbalance, asym-metric growth and muscle imbalance. Although the cause of AIS remains elusive, we have methods of estimating the risk for curve progression of scoliosis and good methods of treatment.

"Idiopathic" means that the condition has no identifiable causes although significant research is ongoing, including the genetic basis for AIS. Approximately 30% of AIS patients have some family history of scoliosis, which would indicate a genetic connection. Many Scoliosis Research Society members are working to identify the genes that cause AIS, and this knowledge contin-ues to expand at a rapid pace. A genetic screening test, called the ScoliScore™, is available as an adjunct to clinical and x-ray information to determine AIS’ risk of progression.

Patients with AIS typically have no pain or neurologic abnormalities (like weakness) and exhibit a normal appearance when viewed from the side, however, several visible symptoms are associ-ated with AIS:

When scoliosis begins in adolescence, patients often report some back pain, typically in the low-er back. However, the general medical consensus is that spine curvature is probably not the cause of lower back pain in most adolescent scoliosis patients. Much of the preteen and teen population experiences adolescent back pain due to participation in athletic activities without hav-ing proper core abdominal and back strength or hamstring flexibility. Also, spine curvature rarely places pressure on organs, like the lung and heart, or cause symptoms like shortness of breath. If these symptoms do occur, however, further evaluation and testing may be necessary.

At the physician’s office, scoliosis is evaluated by observing the adolescent’s posture in a 360º fashion. The examiner checks to ensure that neck, head and pelvis are midline and assess-es body symmetry elsewhere: shoulders, scapulas, legs, arms, hip and more.

After a thorough patient history is given, the patient will be assessed using the following measures: 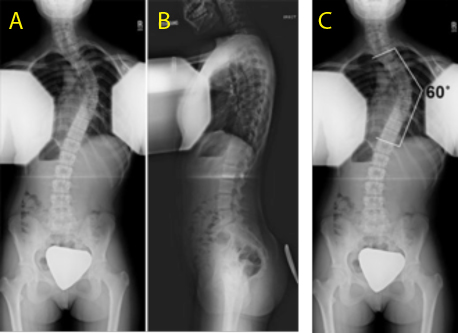 Scoliosis is defined with radiographs that can include a standing x-ray of the entire spine looking both from the back (see Figure 1A), as well as from the side(see Figure 1B). Lead shields pro-tect the patient while allowing for a clear view of the spine. Your physician will be able to meas-ure the radiographs to determine curve magnitude, which is measured in degrees using the Cobb method (see Figure 1C). A straight spine has a curve of 0º; any curve greater than 10ºis con-sidered scoliosis. Between 0ºand 10ºis considered "postural asymmetry" which is not true scolio-sis. The way a patient stands at the time of an x-ray or many other factors can cause a slight curvature. The lateral radiograph is used to determine the thoracic kyphosis (or roundback ap-pearance) and the amount of lumbar lordosis (swayback).

Additional x-rays can be performed to determine the flexibility of the curvature (how much it straightens). X-rays can be taken in which the patient lays on the table and bends to the right and then to the left (see Figure 2).Traction films are taken with the patient's arms and legs pulled to stretch the spine out. 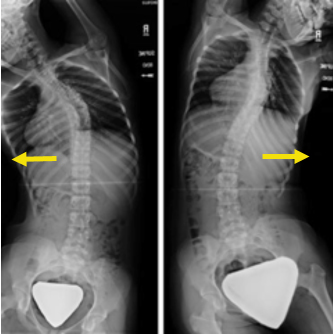 A magnetic resonance imaging (MRI) study of the spine is not routinely used for AIS patients. An MRI is usually ordered if your physician finds some subtle neurologic abnormalities on physical examination, or if you have significant pain or an "atypical" curve pattern. The likelihood of hav-ing something abnormal on the MRI is very small.

X-rays of the spine, pelvis, and hand/wrist are used to determine growth. The Risser grading sys-tem is used to determine a child's skeletal maturity (how much growth is left) on the pelvis, which correlates with how much spine growth is left. The Risser grading system rates a child's' skeletal maturity on a scale of 0 to 5. Patients who are Risser 0 and 1 are growing rapidly, while patients who are 4 and 5 have stopped growing. Generally, patients who are being treated in a scoliosis clinic will have their height measured at each visit to help determine growth potential.

Treatment of AIS is based on the risk of curve progression and falls into three main categories: observation, bracing, and surgery.

The Case for the Brace: It works!

The job of a scoliosis brace is to halt or slow progression of the curve – with an ultimate goal of avoiding a spinal fusion surgery (and the recovery and limitations that go with it). Over the years the design of scoliosis braces has evolved, resulting in greater effectiveness with a lower profile. A recent study by the U.S. National Institutes of Health provides strong evidence of how bracing effects curve progression. Of patients randomly assigned to wearing a brace, 75% had curves that did not progress to the 50° threshold for surgery at skeletal maturity. Only 42% of patients who did not wear a brace were not surgical candidates. The results of the Bracing in Adolescents with Idiopathic Scoliosis Trial (BrAIST) study were pub-lished in The New England Journal of Medicine (Oct. 17, 2013), and make a compelling "case for the brace." 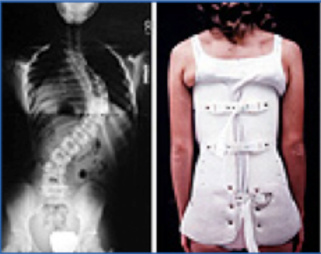 Figure 5. The X-ray and brace of a young woman with scoliosis. A T-shirt is usually worn beneath the brace. The brace is usually custom-made to provide appropriate correction. 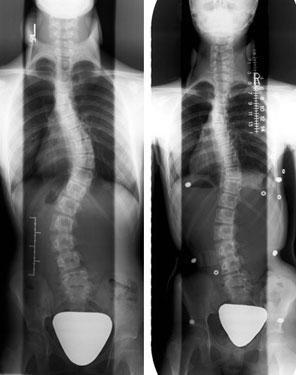 Figure 6. X-rays before and after brace placement showing correction of the thoracic and lumbar curves. 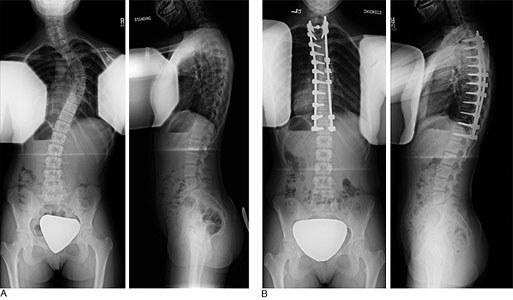 Figure 7. A) Front and side x-rays of a patient with adolescent idiopathic scoliosis in her thoracic spine. B) Postoperative correction through a posterior approach using 2 rods and pedicle screws.

Surgical treatment is often recommended for patients whose curves are greater than 45° while still growing, or are continuing to progress greater than 45° when growth stopped. Fusion surgical treatment today uses metal implants that are attached to the spine, and then connected to a single rod or two rods. Implants are used to correct the spine and hold the spine in the corrected posi-tion until the instrumented segments fuse as a bone. The goal of surgery is to:

The surgery can be performed with either a posterior or anterior approach: 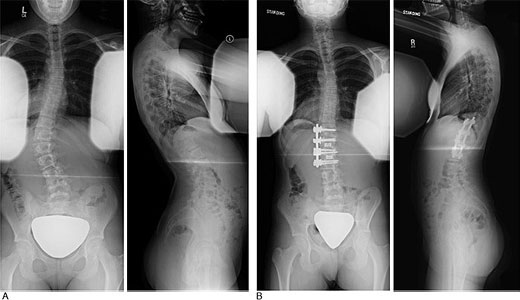 Figure 8. A) Front and side s-rays of a patient with adolescent idiopathic scoliosis in her thoracic and lumbar spine. B) Post-operative x-rays showing instrumentation placed via an anterior (side) approach.

Alternative treatments to prevent further curve progression like chiropractic medicine and yoga have not demonstrated any scientific value in treating scoliosis. However, these and other meth-ods may provide some physical benefit to the patient (e.g., core strengthening and symptom re-lief). Physiotherapy scoliosis-specific exercises are increasingly used in conjunction with bracing in the treatment of progressive idiopathic scoliosis. The combination of the 2 may offer ad-vantages over more simplified treatment plans. Scoliosis Research Society (SRS) supports pilot research studies for the role of exercises in scoliosis treatment.