If your child requires surgery for scoliosis, the procedure used will be selected according to the characteristics of the symptoms and the primary syndrome. The procedure chosen will be based upon your child's specific case. With any of the surgical options, maximizing nutrition and medical status prior to surgery are critical to minimize complications.

This procedure fuses together vertebrae to stop progression of scoliotic curves.

Aimed at stopping abnormal growth on one side of the spine with the hope that continued growth on the other side will correct the curve over time.

An indication for young children with scoliosis with abnormally shaped vertebrae (triangular vs. rectangular) in their spine who have a “trunk lean” or a progressive curve.

Uses a spine-based or a rib-based system (i.e., VEPTR) where the curve is spanned by 1 or 2 rods under the skin to avoid damaging the growth tissues of the spine.

Rods are attached to the spine or ribs above and below the curve with hooks or screws at either end of the rod. Limited fusion is performed at each of the hook/screw foundation sites. 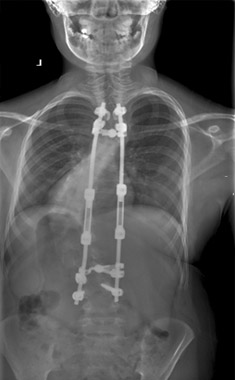 Figure. Growing rods are a spine-based system where the curve is spanned by one or two rods under the skin to avoid damaging the growth tissues of the spine. The rods are attached to the spine above and below the curve with hooks or screws at either end of the rod.

The idea of non-invasive multiple lengthening without the need for anesthesia and open surgery is appealing given the direct relationship between high complications and repeated surgeries.

Intended to produce relative growth inhibition on the convex side of the curve.

May be performed in addition to the posterior approach, depending on the surgeon's determination of how much growth may remain for the patient.

Performed to stop curvature of the spine and achieve permanent correction. The procedure provides permanent stabilization in the corrected position by removing the joints between the vertebrae to be fused.