It was obvious since my teen years that my back was crooked. Over the years, I had periodic episodes of back pain that were treated with bed rest, physical therapy and medications. It wasn't until about 2001 that back pain really began to limit my activities. I started seeing a back doctor who measured my curve for the first time and it was about 40 degrees. Over the next 5 years my curve kept increasing and so did my symptoms. The pain increased and I couldn't walk for more than 15 minutes and sitting for prolonged times also became difficult and I started having some shooting pains down my leg. Physical therapy and steroid injections did not help much. Because of the risks associated with surgery, my local doctors were not ready to recommend surgery. 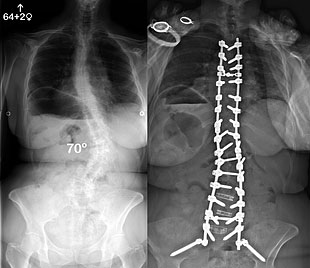 In the spring of 2006, my sister happened to be at a dinner with someone who obviously had a sore back. She started asking questions and found out the lady had recently had surgery. That fall, my first grandson was baptized, so I took advantage of the opportunity to be evaluated by my surgeon. When we went for our first visit, I was sure I wanted to have surgery because my back was limiting things I wanted to do -ski, work in the garden, exercise and play with grandchildren. My husband did not want me to have surgery because he was worried about the difficulty of surgery and recovery.

My surgeon did a marvelous job of explaining pros and cons while remaining neutral so the decision would be totally ours. My husband said he had changed his mind and agreed that I should have the surgery. He could see by the x-rays and my surgeon's explanation that I was only going to get worse and surgery now was the best option.

I was scheduled for surgery in October of 2007. Because I had learned that swimming and walking were the only activities allowed after surgery, I started swimming because walking was difficult and I wanted to be in the best possible shape before surgery. I'm not a very good swimmer but had worked up to swimming 30 laps.

My curve had progressed to 70 degrees and I was scheduled for s spinal fusion from T3 through the sacrum. I challenged my surgeon and the surgery team by bleeding a lot (12 units worth) and having a very unstable blood pressure. I ended up in ICU for 3 days. I think that contributed to me being weaker than I expected. When I got home, it was a huge effort for me to walk up a flight of stairs to our bedroom. We have a long, steep driveway so my husband had to drive me down and up for me to take walks in the street. Conquering walking down and up the driveway was a big milestone By about the 10th week post op, I started back at the pool. I mostly floated on my back and kicked and it took about 6 more weeks before I could finally swim the length of the pool. The gym where I swam also had a hot tub and that was huge in helping get rid of some of the soreness. 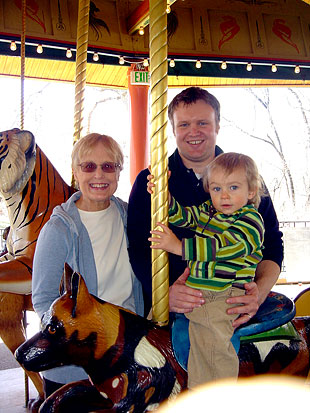 Marcia at the zoo with her son and grandson.

My first big "Aha" moment came in March of 2008, when I walked around the Denver Zoo with my grandson for 2½ hours with no back pain. I had achieved one of my major goals of being able to enjoy my grandchildren.

My biggest dream was fulfilled when I got to ski at Beaver Creek in February of 2010. Being outside and enjoying the beautiful mountains and even skiing better than ever made me feel like I really had my life back. I talked about skiing every time I saw my doctor in the office or in the hospital and finally in October, 2009, he gave me the OK. I promised not to do anything risky, it only mattered to be out there again and to be able to be with my Grandchildren as they learn to ski.

I feel very strongly that it is better to have the surgery sooner rather than waiting until you are more debilitated. The recovery is not easy and if I had been less fit and had weighed more, it would have been more difficult. I expect I will live a longer life because I am able to be more active. I go to the gym with joy in my heart knowing the ski season is coming. 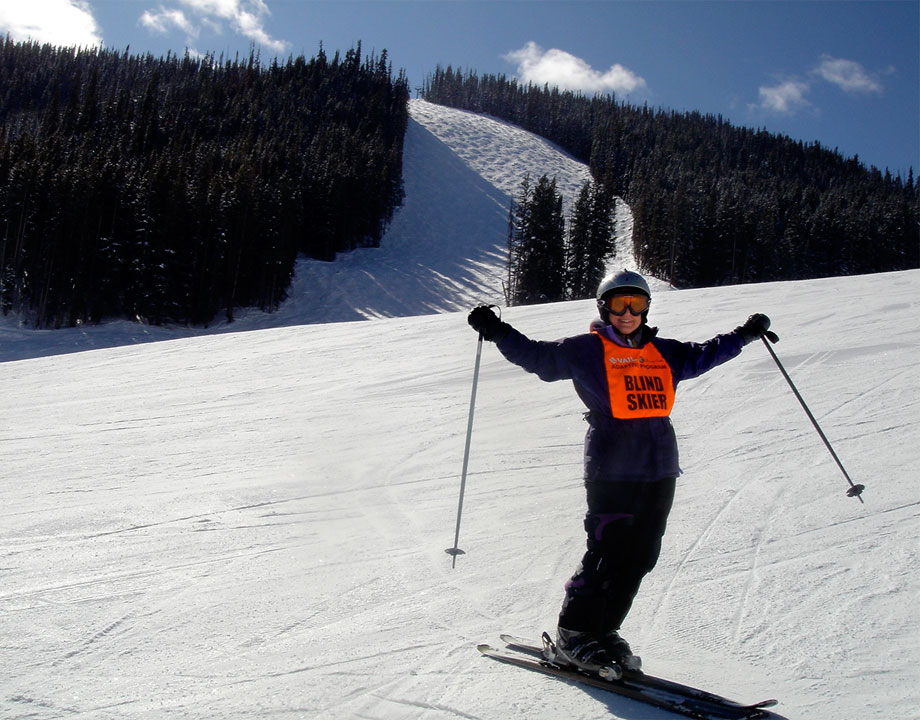