Figure 1: Congenital kyphosis at the junction of the thoracic and lumbar spine.

In the first six to eight weeks of embryonic life, a genetic mistake occurs that results in the failure of formation or failure of segmentation on the front part of one or more vertebral bodies and disc. This defect causes the spine to develop a sharp forward angulation as it grows. The forward bend of the spine is called kyphosis and is considered to be congenital as it occurred prior to birth. Congenital kyphosis does not appear to be inherited but rather something that happened for no known reason.

There are two basic types of congenital kyphosis: failure of formation and failure of segmentation. The failure of formation (Type I deformity) of a portion of one or more vertebral bodies most often occurring in the thoracolumbar spine, results in a kyphosis that usually worsens with growth (Figure 1). The deformity is usually visible at birth as a lump or bump on the infant's spine. The failure of segmentation deformity (Type II deformity) occurs as two or more vertebrae fail to separate and to form normal discs and rectangular bones. This type of congenital kyphosis is often more likely to be diagnosed later, after the child is walking.

As with congenital scoliosis, the potential for defects in other organ systems is present. After x-rays confirm the diagnosis, the physician may order additional tests to determine if occult abnormalities are present in the spinal cord, kidneys, cardiac or gastrointestinal system. The MRI provides additional information regarding the abnormal growth potential and may assist in predicting progression of the spinal deformity.

Failure of formation deformity can present with 30 to 60 degree deformities. With the rapid growth of the skeleton in the first year of life, progression is highly likely. Failure of separation (segmentation) deformity has a slower rate of worsening and may not become a surgical curve until adolescence. 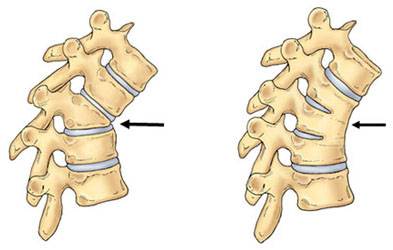 Observation is usually the first method of treatment for a young child with a spinal deformity. The visits to the physician will be spaced according to the likelihood of measuring a significant change in the x-ray between each visit. Type I deformities are more likely to have several visits per year. Severe or progressive congenital kyphosis deformities greater than 45 degrees or kyphosis associated with neurologic weakness are usually treated surgically. Early surgical intervention generally produces the best results and can halt progression of the curve. The type of surgical procedure will depend on the nature of the abnormality.

The surgical choice for a progressive kyphotic deformity is a solid fusion or arthrodesis of the deformed vertebrae. The fusion may also include one normal vertebra above and one normal vertebra below this area. Bone graft from the patient or tissue bank is placed posteriorly, on the back of the spine, along the area of the abnormality. In severely angulated curves, additional bone graft may be placed anteriorly, on the front of the spine, as well as from behind.

Often the fusion is done without the use of instrumentation and without attempting any correction of the abnormality. This is called an in situ fusion- to fuse as is. The bone graft will require 4-6 months to mature into a solid fusion mass. During the postoperative period the fusion must be protected with a cast or brace until x-rays demonstrate a solid fusion.

With progressive kyphotic curves in older children, surgery may include instrumentation (rods, hooks, and screws) that helps to correct the deformity. If the spinal cord is unable to tolerate the manipulative techniques that "straighten" the spine, the surgeon may consider the removal of the mis-shapened vertebrae to realign the spine. The postoperative course remains the same until the fusion mass is determined by x-ray to be solid. 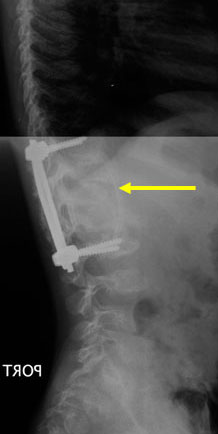 Figure 2: Postoperative x-ray of the instrumentation and fusion of the spine anteriorly and posteriorly.

Minor kyphotic deformities less than 40 degrees are unlikely to become painful or progress into adulthood. Larger untreated curves, especially in the lumbar spine, may be associated in adulthood with stiffness and pain.