I sat shivering on a bed covered with stiff sheets, my hair tucked into a surgical hat. My father stood tall and strong with a stoic expression on his face; my mother wept in the arms of the anesthesiologist. Embarrassed, I tried not to make eye contact with people as my bed was pushed down the hall. A set of doors swung op and I heard jazz music playing in the background. A small woman was arranging what looked like garden tools on a table. A mask was put over my face – and then it was over.

As a teenager I was diagnosed with scoliosis. I was 13 years old when my gym teacher sent home a letter suggesting that I may have a curved spine. My mother located a scoliosis specialist. This man was unique – when he entered a room he was followed by a mass of white-coated students who watched his every move. Standing at least six feet tall, he towered over my petite frame. His voice, deep and raspy, brought out my timid side. His professional manner exuded confidence and his knowledge established it.

My doctor confirmed that I did have scoliosis. My spine was labeled a double major curve or S curve. The doctor decided to take a “watch and wait” approach – every six months I came into the clinic to be checked. When I was 16, surgery was recommended. The curve in my spine had progressed to the point where it would become a major medical problem if it were left untreated.

Ginny, my doctor’s nurse, walked me and my family through the risks and benefits of surgery. She was the “go to” person for questions and a safe place to express fear and frustration. Ginny and my doctor worked well as a team. He spoke the facts and she helped them make sense.

At 16 years old and a junior in high school I was determined that this surgery would not ruin my social life. I explained to my doctor that my surgery must be performed after homecoming, but before prom. I then proceeded to ask that he remove a mole from my back while he was at it. He chuckled, and seemed pleased that I was handling the situation with some confidence.

Vitamin C and iron supplements became part of my daily routine as I prepared my body for blood donation. My mother and I would go to the local blood center once a week where I would donate my own blood for the operation. This process didn’t bother me, but my mother would always feel ill after watching the bag fill up with blood.

My mother’s strength was demonstrated as she took me to appointments and listened to the details of surgery. She asked embarrassing questions about childbirth, sex and life after spine surgery. My mother advocated and protected me through the entire process. Now a mother myself, I can’t imagine the fear and anxiety she must been feeling.

I arrived at the hospital around 5 pm on the day before surgery. After blood tests and an explanation of the pre-operative process were completed, as a surprise my parents brought pizza and milkshakes for me and several of my closest friends.

Later that evening, my doctor stopped by and said that he needed to take pictures of my back. He explained that he would use the photos to compare my back before and after surgery. The photos were taken in my underwear. One of the nurses stood with me as tears streamed down my face. To this day, it is one of the most humiliating moments of my life.

Next was a tour of the operating room. My stomach felt nauseated but I assumed it was anxiety or continued embarrassment from the photos. Later that night, the nurses discovered that I had a fever of 103 degrees. My surgery was cancelled and my heart was heavy.

All the emotions from that day came crashing back when I returned two weeks later for the rescheduled surgery. This time there were no pictures or tours – just milkshakes. My spine was stabilized in February 1988. My surgeon took a square –inch piece of bone from my pelvis, attached a Harrington Rod to my spine and locked in with hooks and wires. I spent two days in the Intensive Care Unit and a week in the hospital.

My memories from the hospital stay consist of lying on the striker frame in pain, staring at the floor or the ceiling depending upon the way I was positioned. Every fiber in my body wanted to move, but the process of moving was unbearable.

A little girl around the age of 4 was my roommate. I remember her having a cast on her leg that hung in traction. It seemed like she cried non-stop – I just wanted her to be quiet. Her every sound caused my body to ache. Soon it became apparent that no one was coming to visit the child. My parents and family friends brought her gifts and spent time reading to her. It was a beautiful demonstration of compassion. 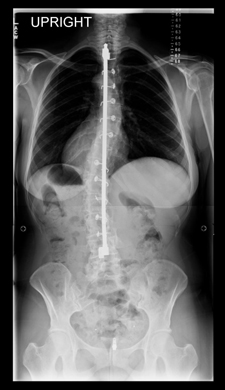 Martha was the nurse who worked with me the most. Four days post-op, my boyfriend planned to visit. Martha sponge-bathed me and washed my hair. Lip gloss was applied to my lips and my teeth were brushed. I’m not sure I looked beautiful, but I looked alive. Martha, like all the nurses was wonderful.

The next six weeks were spent recovering at home. My results were excellent. That summer I was able to attend camp in New York for a month and played Varsity Volleyball in the fall. I continued to see my doctor and Ginny on an annual basis for check-ups. My relationship with them had changed. There was a mutual respect between us. Spine surgery is a huge challenge, and we were successful.

The positive experience lead my decision to enter the nursing field after graduation. My first position was in the operating room as a surgical nurse. I gravitated toward Orthopaedics and especially love the scoliosis cases. My scoliosis surgeon mentored and encouraged me; my passion for scoliosis was ignited. I was able to work along-side my doctor and support the patients who require spine surgery.

Opportunities arose for me to share the experience of my surgery with patients; the response was overwhelming. The ability to ease the stress and worry by sharing my personal experience provided the ambition to purse more education opportunities for the patients and families. I had found my calling.

My scoliosis surgeon invited me to join his team. I began a new phase in my career by working as a nurse for Orthopaedics in the Outpatient Nursing Department. My nursing career evolved further when I became a spine nurse who worked exclusively with scoliosis patients. The opportunity to be mentored by the Orthopaedic spine nurses and the surgeons in the Orthopaedics department, along with my experience as a patient, prompted me to give above and beyond what patients expected. My doctor was my surgeon, but he became my mentor, teacher and friend.

Recently, I accepted the position of Orthopaedic Education Specialist. Development of a Spine Center, scoliosis research, development of education material and training are all aspect of my daily routine. I strive to provide every patient and their family with education, counsel and personal attention.

Twenty one years later, my surgery continues to be a success. As a wife and mother of two children I lead a very active lifestyle. I ran the Columbus Marathon in 2007 and play tennis several times a week. Life after spinal surgery has been very rewarding.

Spine surgery changes a person. It can fix your curvature, reduce pain and improve quality of life. For me, it was transforming in other ways as well. As a 16-year-old, scoliosis was a struggle and inconvenience. Today it is a blessing – a precious gift that I can use to help others. Everything happens for a reason. I have scoliosis and it brings me great joy to serve this population and to share my story.