×
Home: Patients and Families: Patient Stories: Catherine: A Story of Perseverance and Grace

Catherine: A Story of Perseverance and Grace 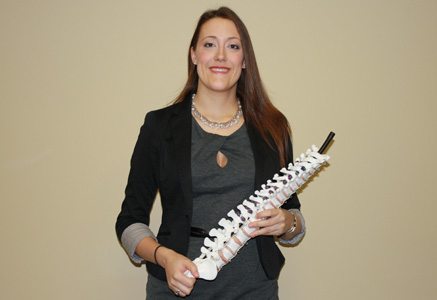 From a very small age, I wanted to be a ballet dancer. I took many hours of class and loved every second of it. When I was entering my teen years, I was picked to go on pointe, a more advanced form of ballet, where you dance on the tips of your toes. To do this, I had to get a routine physical. During the physical, my doctor told me I had scoliosis and that it was pretty severe. After learning the diagnosis, I was referred to a specialist who determined that I could try a back brace for a few years but if my curve progressed, I would have to have surgery, which would most likely impact my dancing career.

I wore my back brace for two years, continuing my dancing, and hoping that it would fix my spine. Wearing a back brace for the first two years of high school was very difficult for me. I wore extra large, baggy sweaters and pants to cover the bulky brace. I was only allowed to remove the brace for showering and dancing.

Unfortunately, the brace could not stop my curve from progressing and by my sophomore year in high school, my curve had progressed to about 52 degrees in the top curve and 45 degrees in the bottom curve. In the year 2000, I had my first spinal fusion surgery from T4 to L3. After several months of physical therapy, and having some discomfort near the top of my spine, I went in for a checkup and the hooks in the top of my spine had become dislodged. Due to this, in my junior year of high school, I had my second spinal fusion. Only two weeks after that surgery, we discovered that my upper level hooks had dislodged again. My third spinal fusion was only a few months later where my surgeon removed the upper instrumentation in my spine and just the lower hooks were left in place.

After three spinal fusion surgeries, my surgeon told me that my dancing career would be difficult with the limited flexibility I retained in my spine. Although this was difficult to hear, I also had a passion for math and science and my high school Advanced Placement Calculus teacher encouraged me to think about a career in engineering. I started to look into the different engineering disciplines and decided that I would attend Virginia Tech after high school to become an engineer.

During my freshman year of college, I discovered biomedical engineering and began to discover how engineers had developed instrumentation similar to what went into my spine. From then on, I was determined to become a biomedical engineer and help people like me with scoliosis. During college, through an essay about my scoliosis, I was able to gain a research position with a professor working on a rod-bending device for scoliosis surgery.

Throughout college, the pain in my back kept increasing but I decided not to have another surgery because I wanted to graduate with my degree in four years. In 2006, I graduated from Virginia Tech with two bachelor's degrees, one in Engineering Science and Mechanics, with a concentration in Biomechanics, and a second degree in Mathematics. After college, I continued my quest to work on developing instrumentation to help individuals with scoliosis. I applied to many different spinal companies after college and was offered a position with a company that is passionate about improving the treatment of spinal abnormalities. Through my new job, I met many amazing spinal surgeons, including the doctor that would become my surgeon.

A couple of years out of college, my symptoms progressed to the point where I knew I needed another surgery. I was only 24 years old but I was out of breath walking up a flight of stairs, my feet sometimes felt like they were numb and sometimes they felt like they were on fire! I didn't want to live the rest of my life like that so I made an appointment in New York City with one of the surgeons I had met through my job. 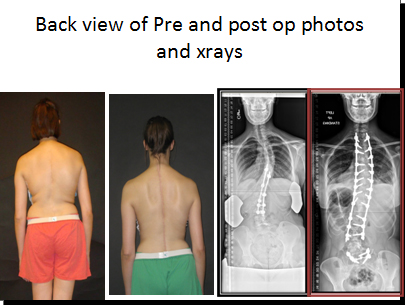 After my mother and I talked with my surgeon about my previous surgeries and my symptoms, he developed a plan to fix my spine through a posterior approach using pedicle screw fixation. I fully trusted my surgeon and I also knew that I could trust the engineering behind the instrumentation because I had worked on some of the components they were going to use on my spine. In August 2008, I had my fourth spinal surgery where I had 28 screws implanted from T2 to L3 for my scoliosis and L5 to S1 for my spondylolisthesis.

When I woke up from my surgery I received a DVD from all of my co-workers wishing me a fast recovery and a straight spine. My surgeon straightened my spine so much during the surgery that I grew three inches. My mother said she didn't even recognize the X-rays hanging from my bed. She told me she thought to herself, "why would someone with such a beautiful spine need all of those screws in their back?" After looking at me in the recovery room, my mother quickly realized that those were my X-rays and that was my beautifully straight spine!

Thanks to my new spine, I lead an active life. I recently graduated with my master's degree from Virginia Tech and Georgetown University in Biomedical Technology Development and Management. Before my surgery, sitting for long periods was difficult but now I can sit though hours of lecture without discomfort. I am also taking salsa dance lessons and have enjoyed learning other forms of ballroom dance. I recently visited Ghana, Africa with my surgeon to help in spine surgical cases at a hospital there. It was such a rewarding experience being able to give back to those with my same condition and interacting with such amazingly inspiring and brave children.

I have continued working as a biomedical engineer on spinal curvature instrumentation at the same company I have been with since college. I am blessed to have a job I love and where I not only help myself but thousands of other people around the world with similar spinal curvatures. It is truly rewarding to be a part of the process that can give someone a new lease on life just as I experienced after my surgery.