Gymnastics was all I could think about in fourth grade. I begged my parents to let me take classes. 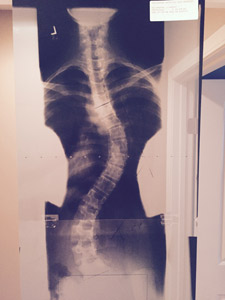 They watched me cartwheel around the house, make my own balance beam out of blankets and then beg some more. They quickly realized how serious I was and finally agreed. I loved challenging my body and mind to move in different ways. The workouts were fun and intense. Within just a few months, I had achieved my first back handspring without a spotter. The rush and excitement of completing a new challenge motivated me to do more. I was strong and flexible, and my coaches were amazed at the ways my back could bend. I loved every second of practice. In fifth grade, my memories of gymnastics start to fade away. The last thing I recall is cooling down at the end of a class. As my coach pressed my hips deeper into a stretch, he noticed something strange and called my mom over. That’s when I heard the word scoliosis for the first time. My coach pointed out that the muscles on the lower left side of my back were raised compared to the right. I needed to see a doctor right away. 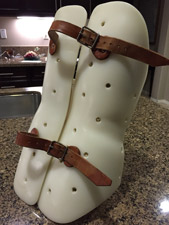 It all happened so fast. In March 1996, almost at the end of fifth grade, x-rays revealed that I had a thoracic curve from T5 to T11 measuring 25 degrees and a thoracolumbar curve from T12 to L4 measuring 35 degrees. I was diagnosed with adolescent idiopathic scoliosis, meaning that my spine was shaped like an “S”. I hadn’t noticed any abnormality before my coach pointed it out and I wasn’t experiencing any pain.  I was fitted for a brace, which I was told to wear for 23 and a half hours a day, which meant no more gymnastics. My half hour showers were the highlight of my day. The brace was made of thick plastic and I was always hot wearing it since I grew up in the desert of California. It fit tightly around my stomach and closed in the back with leather buckles in an attempt to straighten my spine.

I remember wanting to hide it from the other kids at school. I was so embarrassed. It didn’t help that I was painfully shy and didn’t have many friends to support me through this difficult time. My mom took me shopping to buy large t-shirts in an attempt to cover up the brace. If I slouched at all, the brace would poke out of my back like wings; wings that were not nearly as glamorous as the ones I would later wear on the Victoria’s Secret runway. I settled into my new life and was very diligent about wearing the brace as directed by my doctor. As uncomfortable, hot and claustrophobic as the brace may have been, my health was my top priority and was more important than gymnastics. In sixth grade, however, I tried out for and made the dance team. By that time, the brace was almost a part of me.

Unfortunately, the brace didn’t stop the curves from growing. I was x-rayed every six months. At each doctor’s visit, I felt my stomach drop and the room spin as I heard the news that my scoliosis was progressing despite the brace. By the time I was in seventh grade, I developed hypokyphosis; my thoracic curve had also progressed to 54 degrees, while the thoracolumbar curve was up to 57 degrees. Surgery was recommended. My surgery was scheduled for July 30, and I was filled with fear and worry. I researched spinal fusion surgery and read other patients’ stories online. I was encouraged by their testimonials to think positively and to visualize myself as healthy and vibrant after surgery. I also read about the importance of being in great physical shape before surgery. I jogged around my neighborhood to build endurance, clear my mind and practice my positive affirmations. 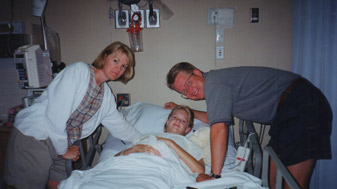 I met my orthopedic surgeon a few months before surgery. My family and I decided to seek an experienced surgeon in Los Angeles to perform my operation. He was later described to me as a legend in the field of pediatric scoliosis surgery. Needless to say, I am incredibly fortunate to have such loving parents who found the best possible care for me. During my first office visit, the doctor, who had a gentle demeanor and silly ties, showed me a photo album of his patients after surgery. They were mountain biking, water skiing, golfing and dancing! He reassured me that spinal fusion surgery wouldn’t prevent me from having a normal and active life. On the day of my surgery, I was surrounded in the waiting room by my parents, my grandmother and my two sisters. In an instant, the reality of the situation hit me. I was scared. My family all over the country and people at my church were all praying for me, which gave me strength.

After a nurse gave me some medication, I started feeling more and more relaxed and then my memory fades. According to the journal that my mom kept during my hospital stay, the surgery took a total of seven hours. She wrote about a funny episode that happened as the staff wheeled me out of the OR. Despite my eyes being swollen shut from laying on my stomach for so long, I waved to everyone while simultaneously fighting with the nurse to take off the oxygen mask. These moments of humor helped my family cope. I feel like it was harder for them to see me go through such a major surgery than it was on me. I remember waking up in the ICU with my mom by my side. My eyes were so puffy that it was difficult to see her, but I felt so much better with her there. The nurses came into my room frequently to check on me and to turn me onto my side. The next morning a nurse brought in a tear shaped stuffed animal with a pain scale of zero to 10 on the front. She asked me to point to a number. I remember pointing to zero. 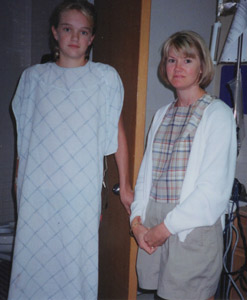 I was in the hospital for one week and received excellent care from the nurses. There were difficult times though. For the first few days, I felt nauseated and vomited when I tried to sit up. On day two, I had to receive a blood transfusion, since I had lost a lot of blood during surgery. Sitting up was painful, but standing up was even more difficult. It was a proud moment when I could finally stand, and I had grown an inch and a half! I was told that I could go home when I could walk well. I worked with a physical therapist, often times pushing my limits in order to walk faster and to climb stairs. Although I felt physically weak, something in my mind had changed. I was determined to get better and to get back on the dance floor.

I was finally released from the hospital with armfuls of flowers and stuffed animals. My recovery left me feeling inspired and elated. I knew that if I could overcome a major surgery, then I could do anything. Despite some restrictions, I returned to dance practice once the school year started. I continued dancing competitively through my freshman year of college. My surgeon was right. Spinal fusion surgery didn’t limit me physically at all. In fact, it made me stronger both physically and mentally. I set my mind towards several goals, including graduating in the top ten of my high school class and attending University of California, San Diego (UCSD) as a biology major with the hope of becoming a doctor or medical researcher. But, another door opened. 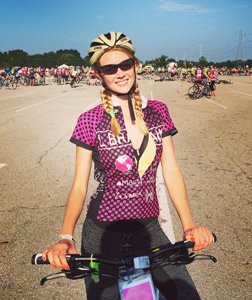 About ten years ago, I was scouted by a modeling agent and within a few months had moved to Paris to work as a fashion model. I’ve since walked in hundreds of fashion shows, been on numerous magazine covers and have been featured in campaigns for Dolce Gabbana, Tommy Hilfiger, Victoria’s Secret and more. In 2007, my dream of walking in the Victoria’s Secret Fashion show became a reality. I walked in the show eight times and had the honor of carrying some of the heaviest wings in the show. I have also participated in 50 mile bike rides to raise money for cancer research, do yoga almost every day and still take dance classes. Most people have no idea that I have two metal rods in my back, especially since this is the first time that I’m telling my story. 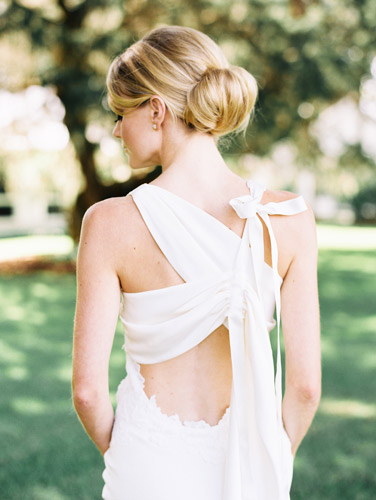 Despite all of my success, the accomplishment that I’m most proud of is the scar on my back. Enduring bracing and spinal fusion surgery helped me develop a depth of character that has convinced me that I can do anything that I set my mind to. I recently cofounded a line of cosmetics, adding entrepreneur to my list of titles. Starting a company is an exciting new challenge for me, one that I’m more than ready to take on.However, the title that I most want to obtain is that of messenger. My goal is to let all of the children who are facing scoliosis treatment or surgery know that they are incredibly special and will go on to do amazing things. My message is for you to stay strong and positive. If a shy, awkward teenage girl from the desert can get through this, so can you.